“To edit oneself after the lapse of nearly half a century is like taking an appeal from Philip drunk to Philip sober. The changes of thought and feeling between the middle of the nineteenth and the beginning of the twentieth century are so great that the impulsive young person who penned the following record and the white-haired woman who edits it, are no more the same…”

Quite unusual that in 1908 Eliza Frances Andrews (known as “Fanny”) published her own journal of Civil War experiences. There cannot have been many women whose youthful journals were handled by themselves as editor. Although, the early 20th century does seem to have been a rare period with frequent publication of diaries, letters, lives of average, everyday people. 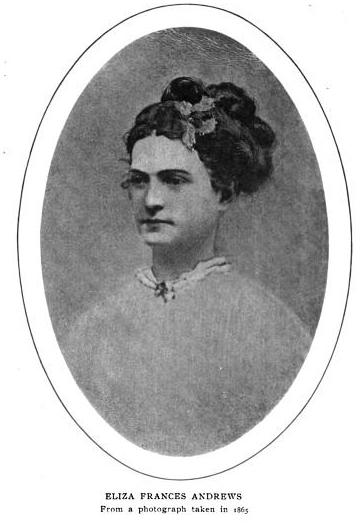 Eliza Frances Andrews writes of the years 1864 and 1865. Her first entry marks her arrival in Macon, Georgia:

“Dec. 24. 1864, Saturday. — Here we are in Macon at last, and this is the first chance I have had at my journal since we left home last Monday. Father went with us to Barnett, and then turned us over to Fred, who had come up from Augusta to meet us and travel with us as far as Mayfield. At Camack, where we changed cars, we found the train literally crammed with people going on the same journey as ourselves. …. 65 miles of bad roads and worse conveyances, through a country devastated by the most cruel and wicked invasion of modern times.”

I include the Books.google – digitized from a copy at Harvard – as the main source of the book; it seems a “well-done” scan. [I have not read the book.] If you’ve ever seen a BAD google scan – one with “slurred” pages, or missing pages, you will know what I mean! An alternative site is the Internet Archive edition.

There is a retyped “electronic edition” – with very good photographs – at the University of North Carolina’s site, Documenting the American South. The List of Illustrations (at the front of the book) even allows for clicking on the page number to bring up the photo in question! (However, you cannot enlarge the photos, other than increasing the “zoom” on your browser.) Read the UNC Summary here.

I became MORE interested in the book’s photographs when I spotted that the book had an illustrated spread from her original diary. But such a curiously “grey” image that it’s difficult to muster enthusiasm for it. Still, I do wonder: What has become of the original diary kept by Eliza Frances Andrews?

(She also hints in that December opening that she regularly kept a diary – “[T]his is the first chance I have had at my journal since we left home.”)

I will also mention, the photograph on the “cover” of at least one digitized copy is not Fanny Andrews; it is her sister Metta Andrews. 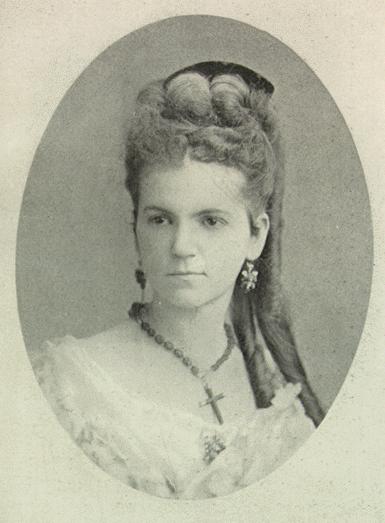 I must admit to a partiality for Josie Underwood’s Civil War Diary (a “modern” edition, which is due out in paperback in October 2021; obtain a hardcover copy – you won’t be disappointed, if you are a lover of diaries.) See the University of Kentucky Press. I’m still waiting for a northern girl – and may have to wait for my own reproduction of the Diaries of Isadore Albee of Springfield Vermont.

Harris Henderson, ends the UNC Summary with the following words of encouragement to readers:

“One of the important aspects of the Journal is the record of daily interactions among upper-class southern men and women struggling as refugees in southern Georgia. What makes the diary unique, however, is the commentary that Andrews adds some forty years after her original experience. She confesses to the difficulty she has remembering such a trying time and highlights the challenge the South faced in moving beyond its painful past.”

A Botanist, Educator, and Writer – Fanny Andrews was a 2006 Inductee to Georgia Women of Achievement. It is there that one learns the later life achievements of this woman:

“Writing was Fanny’s passion. Over the course of her lifetime she produced novels, poems and botany texts, as well as serials, articles, essays and editorials for more than 70 magazines and newspapers. Her first article for national publication was a political piece appearing in an 1865 edition of the New York World. In it she assumed the guise of a male writer because women writers were uncommon at the time and often not taken seriously. In other writings she adopted the pseudonym ‘Elzey Hay’.”

There is also a link to a 2-minute YouTube video. The brief moments highlighting the botanical drawings so remind me of my research into Mary Gosling and Emma Smith (the latter, Jane Austen’s niece by marriage), which I present on my main blog, Two Teens in the Time of Austen.

One comment on “War-Time Journal of a Georgia Girl”

Ladies of Llangollen -- a history of Sarah Ponsonby and Eleanor Butler, in contemporary words

Two Teens in the Time of Austen -- Mary Gosling and Emma Smith are the two teens in question. They grew up in Regency London!

Readers: tell what diaries, letter volumes, biographies have caught your eye.
Writers: tell what edited or authored texts you have coming out.